Have you seen movies or documentaries on the gold rush?  There’s usually a scene where a prospector is looking at a mountain and he says to his partner, “There’s gold in them there hills!”  Notice, the prospector would never say, “There’s aluminum… or copper… or nickel in the hills!”  The prospector wants gold!  As do many individual investors and nations.

Since the dawn of civilization, gold has been used as both currency and a store of wealth.  The skeptic, and there are lots of them, asks, “Why?”

None other than the late economist John Maynard Keynes called gold “a barbarous relic”.  Even the Oracle of Omaha, Warren Buffett, demonstrated his skepticism when he said, “Gold gets dug out of the ground in Africa or someplace.  Then we melt it down, bury it again, pay someone to stand around guarding it.  It has no utility.  Anyone watching from Mars would be scratching their head.”

The purpose of this blog is not to defend or defame gold but to help you understand the history of gold as a currency and inflation hedge.

Before there was government issued paper money, people still needed to buy goods and services.  They could trade and barter, but that becomes cumbersome.  For example, how do you trade wool for a bushel of apples?  Well, you can stand there and bicker back and forth until an agreement is reached, or you can use an agreed upon medium of exchange.

Slowly, people began to adopt new tools to use as a medium of exchange.  But they needed something that could be used as currency.  Per the World Economic Forum website, (weforum.com), gold, silver, and platinum fit the bill, but mostly gold.  As weforum.com says, “There are [only] five metals that fit the bill [for use as currency].  Platinum, palladium, rhodium, silver, and gold.  Silver… tarnishes over time.  Rhodium and palladium are more recent discoveries… platinum’s extremely high melting point would require a furnace of the Gods to melt back in ancient times, making it impractical.  This leaves us with gold.”

Further, for something to have the value needed to act as currency, it needs several characteristics, including that it is rare, durable, and divisible.

Gold is extremely rare.  So rare in fact that Forbes Magazine published an article on November 19, 2010, that claims, “… we would need 3.27 {Olympic sized} swimming pools to hold the entire global supply of gold, which some would argue is the entire amount of gold mined since before the Egyptians began mining gold before 2000 BC.” (source)

Gold is durable. If a trader is going to travel through the elements to foreign countries for trade, his currency must be able to withstand rain, snow, or whatever else Mother Nature decides to throw at him.   Again, gold fits the bill.

Gold will not tarnish or rust and is the most corrosion proof and oxidation resistant of all metals. (source)

Here are a few examples of golds durability, divisibility, and malleable traits.  One ounce of gold can be stretched into a thin wire only five millionths of a meter thick that would stretch 50 miles.  That same ounce of gold can be hammered into an ultra-thin sheet that is 300 feet square.  In fact, these sheets of gold cover the mirrors on the Hubble Space telescope and are 600 atoms thick (whatever that means!).

We can check the “durable” box.

Lastly, the currency must be divisible into smaller increments.  Many metals, including gold, can easily check this box.  Currently, gold bullion coins issued by the US government come in four sizes: one ounce, one half ounce, one quarter ounce and one tenth ounce.  The smaller the coin, the less gold it contains.

A newer twist on gold as currency is known as a “Goldback”.  One of the knocks against gold as a currency is its divisibility.  As you saw above, the government issues legal tender coins as small as one tenth of an ounce.  However, at the time of this writing, a 1/10th ounce American Eagle gold coin costs approximately $276.24.  If you run to the store for some milk, cookies, and a can of soup, how would you use a coin worth $276?  Further, if you want your change in gold, how would change be made?

Enter: Goldbacks.  Goldbacks are a type of currency that is made of physical gold that has been pressed flat like our government issued “greenbacks”.  They come in denominations of $50, $25, $10, $5, and $1.  They are legal for use in Idaho, Nevada, and New Hampshire at “participating businesses”.  Not exactly “legal tender” but also accepted as payment by many businesses.  Wyoming is on deck for allowing Goldbacks as well.  With the introduction of Goldbacks, gold is now more easily divisible. 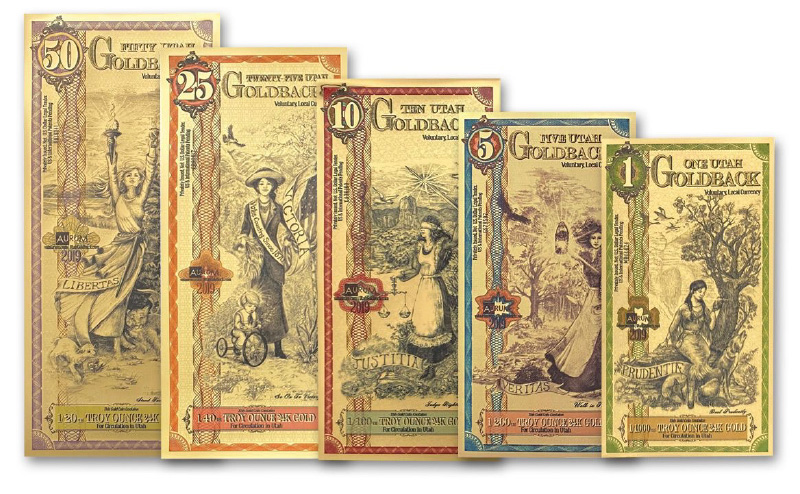 We’ve made the case as to why gold has historically been considered a currency but why not just stick with the good old greenback?  One word: fiat.

Fiat money is “government issued currency that is not backed by a physical commodity such as gold or silver, but rather by the government that issued it.”  (source)

Those opposed to fiat currency contend that the American dollar contains few of the historical traits of currency.  A dollar bill is not rare or durable but is divisible.  Additionally, there is nothing to keep governments accountable with fiat currency and they can just run printing presses when they need cash.  This can lead to high inflation and the collapse of the currency’s value.

In fact, history is littered with countries who did just this.  According to a September 26, 2012, article in Business Insider titled “The Failure of Money”, “Fiat currency has reigned in the last forty years, but every fiat currency that has existed in history has eventually failed.  A study of 775 fiat currencies indicates the average life expectancy of fiat currencies is 27 years, with some taking months to collapse and others surviving for centuries”.

While the US government has abandoned the gold standard, many gold fans are creating their own, personal gold standard by investing in gold and silver coins and bullion.  Many consider an allocation to physical gold to be an insurance policy against government printing presses.  This leads us to the topic of inflation.

Inflation is one of the biggest enemies to savers and investors and gold has a history of acting as an inflation hedge.  Many people don’t realize the impact of inflation, but the picture below summarizes inflation’s impact over the last 100 years.  As you can see, inflation has eroded the value of the dollar by approximately 98% since 1913.

To further illustrate golds potential inflation-fighting ability, I once read that, in 1913, you could buy a decent suit for $10 in cash or a $10 gold coin.  Today, you can still buy a decent suit for a $10 gold coin (which is worth $572.46 as I write this blog according to USgoldbureau.com) but a $10 bill won’t even buy a new tie.  That’s the impact of inflation and gold as an inflation hedge over the last century.

Just last week, Charlie Munger, who is Warren Buffett’s business partner over the past 50-60 years, said that he believes the dollar is going to zero over the next 100 years (much like the last 100 years) and added:

“Inflation is a very serious subject. You can argue it’s the way democracies die. When democracy dies in Latin America, inflation is a big part of it. So, it’s a huge danger once you’ve got a populace that learns it can vote itself money. If you overdo it too much, you ruin your civilization a lot. And so, of course, it’s a big, long-range danger.”

This is important because, as you likely know, inflation was recently running at 7.5% and is at the highest level in 40 years.

Gold is acting accordingly with a year-to-date return of +3.96% (as measured by the SPDR Gold Trust, symbol GLD) as of the date of this writing.  That’s versus the S&P 500 which is down 8.84% for the year.  This can always reverse but gold seems to be responding to the inflation threat and other geopolitical chaos as it has in the past.

Should you invest in gold?  We would suggest that you talk about this with a qualified financial advisor before making this or any investment.  Make sure you understand the potential risks.

Pros and cons of gold as an investment:

Pros: While there are no guarantees, gold has historically outperformed savings accounts and inflation.  It has acted as a hedge during times of financial and political chaos and has a long history as a currency and store of wealth going back 4,000 years.

Cons:  Gold has long periods of poor performance followed by long periods of outperformance.  As an investment, it is important to get the timing right.  There is a cost for safekeeping your gold.  If not properly stored, it is easily stolen.  Historically, US stock market indices have performed better than gold.  However, gold often outperforms when stocks aren’t doing well.

Content created by the team at Callesen Wealth Management.

Check the background of this firm/advisor on FINRA’s BrokerCheck.